It’s great to be a pop culture buff, to enjoy little bits of all media that float on your side of the lifeboat, but there’s also great fun in being a specialist – picking a massive property and make it your thing. Lately I have been browsing the wheel of time novels that, at the pace I’m going (one chapter a night before bed) should last me the next two years; and my partner just finished the Berzerk comics which led to a very bloody conversation over dinner.

But if none of these are quite your cup of blood, you might be interested to hear that Viz Media has just announced a re-release of Bleach volume 1 and also the first 20 (!) volumes of my hero academia. After 20 years, Bleach will reach its conclusion in October, so now is a good time to dive in (pre-orders are currently open for an August release). And MHA (also pre-order, October release) is one of those phenomena that has its hooks among young nerds and will likely shape the next generation of pop culture, so if you’ve got the bandwidth, it’s a ride worthy of enjoying it.

Or just flick through 30 second TikTok videos, it’s fun too.

We also have an extremely enjoyable restaurant romance coming out this week, as well as spaceships and ghosts. Thanks as always to Phoenix for sorting out the new releases!

Like nonstick cookware, this quirky kitchen romance is almost entirely frictionless, a brilliant comforting meal that goes down so light and airy it leaves almost no impression. Ben is a recent college graduate with an English degree who can’t find work in his field – but by a stroke of luck he manages to work his way into an entry-level position at a fancy restaurant . The chef is skeptical of his abilities; his friends are angry that work takes him away from social time; her parents would not approve; but none of these misfortunes have consequences beyond a few pages of awkward conversation. If there’s any tension, it’s between the anxious Ben and his handsome colleague Liam; but their chemistry doesn’t fizz as much as it maintains a low simmer. Cozy kitchen banter keeps the highs from getting too high and the lows from getting too low in this extra-middle story. It’s a nice relief from the drama for readers who don’t like conflict; but those looking for narrative stakes may find their attention wanders. Good thing it tastes so sweet.
Rating: 🍳🍳🍳🍳 (4/5)
Screenwriter: Jarrett Melendez. Illustrator: Danica Brine. Colours: Hank Jones. Letters: Hassan Otsmane-Elhaou.

Like a fillable gothic horror template with mostly empty fields, A town called terror appeals to all the right tropes without adding much original twist. A creepy, rude old man died, but someone or something reanimated his corpse; a tough young man with a goatee was kidnapped from his childhood home when his father died. With plenty of time for rumination and reflection, it’s not a particularly hectic page-turner. But the art is intriguing, a black-and-white-and-red approach that conjures up a grim foreboding far more effectively than the events of the story. But the writing veers less towards the scary and more towards the silly: I burst out laughing when I turned a page and saw a group of crows perched on a sign that read “WELCOME TO TERROR “. About as scary as putting your hands in a bowl full of peeled grapes that you were told were eyeballs.
Rating: 🦶🦶🦶 (3/5)
Screenwriter: Steven Niles. Drawing: Szymon Kudranski. Letters: Scott O. Brown, Marshall Dillon. Alternate cover: Tony Daniel.

It is impossible to ignore the metaphor of To burst, partly because the book insists so much on reminding you. Several years ago, mysterious cubes appeared on Earth and began to kidnap young people for unknown reasons. After the initial resistance proved futile, the humans settled into a comfortable routine where everyone just accepted that once in a while a group of teenagers would simply disappear. The new normal! Extrapolate that premise to school shootings, the pandemic, or global warming — whatever crisis you like we’ve just decided to live with. But although the premise is science fiction, I don’t think it’s fictional sufficient – much of it feels like documentation of our depressing preference for accepting a crisis instead of fighting it. Luckily, in the final pages, a daring scheme emerges among a group of spunky, mismatched teenagers; it would have been nice to get there a little sooner instead of wallowing in a premise that we already know too well because we’ve been living it for so long.
Rating: 🧊🧊🧊 (3/5)
Screenplay: Zack Kaplan. Design: Wilton Santos. Colors: Jason Wordie. Letters: Jim Campbell. Covers: Adam Gorham, Rafael Albuquerque. 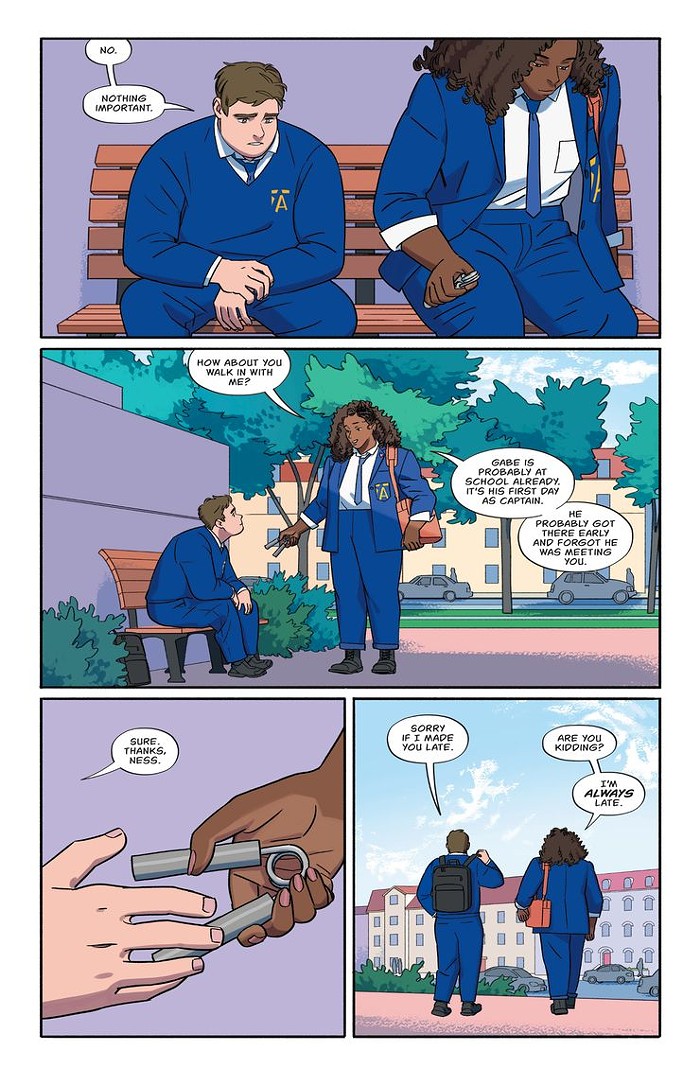 I can’t wait to read love and war, a queer romance set in the world of competitive college tug of war. The recently released Comfort, a delightful queer story about a cheerleading squad, just won a GLAAD award — if you haven’t read it yet, now is a good time. There’s some great superhero stuff this week: a large hardcover reprint of Wolverine X weaponand also Breaking point has shenanigans with Batman. There’s some new Sandman stuff from DC, just in time to coincide with the new Netflix series. And for something a little more grounded, sand days is a historical dramatization of The Dust Bowl.

(Updates after Kremlin said Putin took liquid nasal spray, not powder; adds RDIF pending WHO visit) By Polina Nikolskaya and Anton Zverev MOSCOW, Nov. 24 (Reuters) – Russia on Wednesday announced plans to export a nasal form of its Sputnik vaccine against COVID-19, which President Vladimir Putin said he had taken as a booster. Putin […]