VSAre French people big-headed in their kitchen? Of course they can, and they are about to. The International City of Gastronomy and Wine opens in Dijon next Friday. With an investment of around £210m, France is claiming world dominance with a drink, a gratin, some garlic and a smile. This ranges from giant macaroons to grand crus, and everything in between. The infuriating thing is that it looks like it might work.

For its genesis, we must go back to 2010, when Unesco recognized that the “French gastronomic meal” constituted an element of the world’s intangible heritage. The rest of the planet rolled their eyes, but the French were delighted. They began designing projects to exploit the new status. First an exhibition-museum in Lyon, which closed after a year because it was deemed insufficient. The new center has a whole new scale, scope and inventiveness.

Frankly, I expected no less from Dijon. It was the capital when the medieval Dukes of Burgundy were more armed than France, traveling across swaths of Western Europe. The Grand Ducal Palace encapsulates past power and glory, overlooking a semi-circular square as elegant as any square in France.

In more recent centuries, Dijon – like Burgundy as a whole – has retreated from the world stage to play to its true strengths: eating, drinking and making mustard. It excels in all three, hence its selection as the site of the food and wine hub, as well as the propensity of its visitors to waddle. By the time I was able to preview it, I had been in town 36 hours and had eaten no less than six meals, and was proceeding like an alderman.

But I could still see that it was a major cultural project — the biggest in France this year. Admittedly, the French never knowingly undersell themselves, so a lot of talk has to be filtered out on “unique know-how”, “French visions of excellence” and “skills of which the whole world is envious”. . What remains, however, stands up to scrutiny. The 16-acre site takes over what was until 2015 the city’s hospital for 800 years. Contemporary elements have been grafted onto and between old buildings restored to monumental dignity. These include a rust-colored metal extension that juts out towards the city center like one of those jetways leading to airliners. Strangely, it looks good.

Inside, we plunge into a universe where the French revel in their epicurean marvels, but also justify them. Only they could take a baking exhibit seriously enough to create a pile of macaroons the size of tractor wheels and a cake big enough for visitors to explore from the inside. Other permanent exhibitions bring the bells and whistles of modern museology – interactive this and that, films, hands-on experiences, virtual cooking – to reflection on restoration through the ages, and on the involvement of senses and wine of Burgundy. 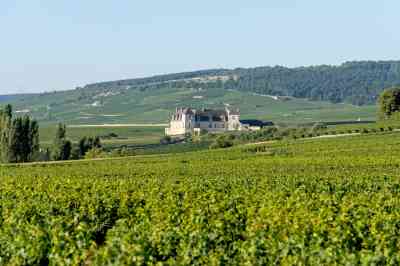 Clearly, a Dijon cross wasn’t going to hold off the last of them. Do you want to learn how to taste vintages like people who talk about “flower of acacia”? There is a place on the right as you enter. Further on, the Cité wine bar is a dream for oenophiles: three floors and 3,000 bottles of Burgundy and elsewhere, including 250 sold by the glass, from £3 to much more, much more for wines than you would expect. will find more, unless you hold a hedge fund.

Elsewhere, you’ll find a bookstore, a Ferrandi cooking school, and several restaurants, from gourmet snack eateries to aspiring Michelin cohorts. A luxury hotel is due to open next year.

But on my return, I’ll head straight for the centerpiece of the Cité, the gastronomic village. Half-market, half-exhibition, it promises a rolling cast of agri-food producers from all over France. They’ll sell, but also demonstrate, talk, barbecue, cook with chefs in the on-site kitchen, and otherwise enroll you in the narrative of French food. Among the former are Charolais cattle breeders, coffee roasters and Époisses cheese producers.

In short, this place is more than a showcase of the gastronomy of our neighbors; it is an overview in concentrated form, therefore an entry. Of course, you have to suspend disbelief that such attention is focused on, say, the seemingly trivial matter of wine pairings. This is France – smile indulgently and stay stuck. I doubt you will regret it. I didn’t and almost nothing was ready when I visited. Later, I took a tour of the Côte de Nuits vineyards south of Dijon. The vines cover the plain and climb the slopes, and one becomes imbued with words about wine — that, for example, the climates (a Burgundian term for specific small parcels of vines) produce wines with an “entirely different” taste. No, they don’t. Entirely different tastes are like between Angel Delight and a kipper; the different tastes here are as subtle as distant whispers. Never mind. It’s good to remember that the whole edifice of great vintages starts with dudes in boots carrying buckets.

Back in Dijon, I rubbed shoulders with an august city with mansions, old half-timbered streets and a well-lived sense of centuries. A mustard workshop showed me that making the dressing is easier than you think. Gingerbread specialist Mulot & Petitjean told me that gingerbread was first brought to the west by Genghis Khan. At one point I wandered through what is probably the prettiest covered market in eastern France, hearing concerns about snails – snails are a key traditional Burgundian dish, but with French stocks gone, many are now imported from Ukraine, so expect shortages.

Head to Jardin Darcy park for a gourmet break. At the entrance was a life-size replica of François Pompon’s sculpture Polar bear. This is the most beautiful of all animal sculptures and I was delighted. Dijon provided almost everything I needed.

The four-star Chapeau Rouge has double rooms from £110, with William Frachot’s elegant two-star Michelin restaurant alongside (four-course dinner £88; red-hat.fr). Or opt for the Hotel des Halles, a contemporary three-star alternative with double rooms only from £69 (hoteldeshalles-dijon.com).

In a crowded field of restaurants, we opted for the new and young, including Chez Monique, with evening sharing plates such as gravlax-style trout with berries, turnip and ginger (plates from £8; moniqueboireetmanger.fr). Or there’s the bubbly La Fine Heure, where staff offer quality wine tastings and Burgundy dishes like beef bourguignon, deconstructed and reconstituted with a modern twist (menus from £26; lafineheure.fr). Our pick for lunch is Le Chat Qui Pense, where at the unannounced townhouse premises across the street (press the bell to enter), former psychologist Isabelle Sonnet creates dishes of finesse on a menu which has been changing daily for two years – Monday to Friday only, booking essential (three course menus from £20, lechatquipense.com).

Bars abound, but there is only one I insist you visit: Monsieur Moutarde, set in a chic townhouse, with a succession of lounges, a courtyard and the most surprising cocktails in town. ‘east of France (mistermustard.com).

Mulot & Petitjean for gingerbread (mulotpetitjean.com); Fallot for what might be the only mustard tasting bar in the world (fallot.fr); and for any other foodstuff Les Halles, or halls, open on Tuesdays, Thursdays, Fridays, Saturday mornings and for brunch on Sundays (facebook.com/hallesdedijon)

How to get there

Take a train from London via Paris in about five hours (eurostar.com) or fly to Geneva

Anthony Peregrine was the guest of the Burgundy Tourist Office (burgundy-tourism.com). For more on the food and wine center, see citeegastronomy-dijon.fr

Museums and their gems | Apollo Review

Everywhere the room features spectacular and exemplary stand-alone specimens, including a giant block of labradorite with exceptionally large crystals; the massively psychedelic, azurite and malachite Singing Stone from Bisbee, Arizona; cranberry-colored Tarugo elbaite tourmaline from Minas Gerais (“one of the largest intact mineral crystals ever found”); and a stunning stibnite resembling a huge metallic bird’s […]

Ndubuisi C. Ezeluomba Returns to Virginia Museum of Fine Arts as Curator of African Art: “I hope to inspire a deeper appreciation and understanding of African art”

THE VIRGINIA MUSEUM OF FINE ARTS (VMFA) named Ndubuisi C. Ezeluomba as Curator of African Art. This appointment marks his return to the Richmond Museum. From 2016 to 2018, Ezeluomba was Andrew W. Mellon Curatorial Research Specialist in African Art at VMFA. Ezeluomba will be responsible for the museum’s collection of African art, providing stewardship […]